The Redmire Feast – and the Cheese-Cake Gathering 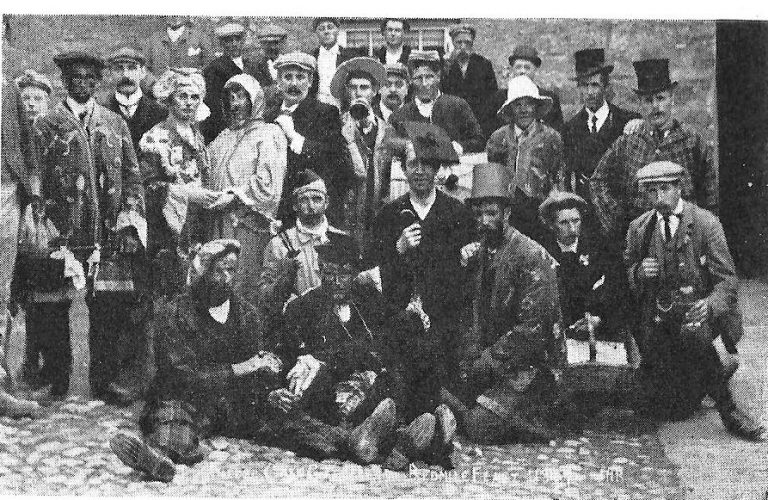 Redmire Feast 1900. Cheese-cake gatherers are shown dressed up in costume.

One of the big events in the Wensleydale area of Yorkshire used to be the Redmire Feast, and its ceremony of cheese-cake gathering.   The Festival  took place over two days: Feast Sunday, the first Sunday after the 19th of September, and the following day, Monday  For these two days the district give itself up to enjoying the experience.   And the good folk of Redmire and Castle Bolton still do their best to carry the spirit of the original Feast forward today, although without the cheese-cakes!

In September 1948, Fred Lawson, the artist, described the Fair in The Dalesman:

At Feast time every house was filled with visitors and the population was at least doubled. The butcher who came round weekly with his trap always brought two traps at Feast weekend.   A gay gathering of caravans, roundabouts, and stalls would crowd the Redmire Green, and there would be enthusiastic contests at quoits, ‘wallops’*, and foot-races, with several trotting matches during the three days. There was, of course, a dance every evening. Local inns put up every sort of attraction they could in the way of singers, dancers and comedians, and did a wonderful business. One much favoured comedian, known as ‘Weary Willie’, had been first spotted on Redcar Sands and persuaded to come to Redmire Feast. The cheese-cake gathering was the highlight of the Feast. I think this came to an end about 1910, and I think I saw, and heard, the last.  I was in the pastures about half a mile above Redmire when I heard so much noise that I thought the place had gone mad. I was told it was the cheese-cake gatherers setting out. Anyone and everyone joined in, so long as they were dressed in an absurd rig-out and – for preference – had blackened their faces. The whole body went in procession through the village. One or two would call at each house, often on the pretence of oiling the clock, and they would only come away when they had been given something to put in their baskets they carried with them. When they whole village had been visited the procession moved back to the local inn where the cheese-cakes were eaten. The cheese-cakes were a kind of tart, sometimes made in a saucer, sometimes smaller. But instead of a jam-filling there was a mixture made of cheese-curds, eggs, sugar, butter, and a little nutmeg. They were very good.

* ‘Wallops’ – a game very much like skittles, except that a stick is thrown instead of a ball.  The skittles, or ‘wallops’, were about two inches thick and around eight or nine inches in height, with pointed ends, like pencils. They were placed on a flat surface in three rows of three, each row about 12 inches apart (see sketch below).   A stick would be thrown from around nine yards (men) or  six yards (women) and a prize given to the person who knocks down the most wallops in two throws. Fred Lawson sketch of the game of ‘Wallops’ at the Redmire Feast.  Image: The Dalesman, 1948.