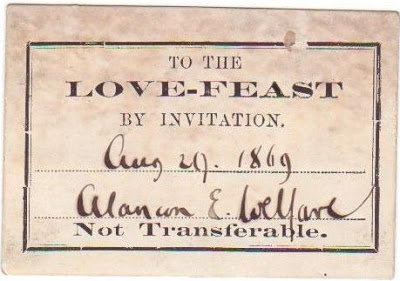 Here are three recipes for Lovefeast Loaves, but first here is some background information:

The Lovefeast was a form of religious assembly, where groups of worshipers came together to eat food and praise God. Although the origins are with Jesus and his of sharing bread with his disciples, it was the Moravians in Germany in the early part of the 18th century who established the practice as a way of bonding worshipers. This quickly spread to other Moravian groups world-wide.

John Wesley first encountered Lovefeasts among the Moravians in Savannah, Georgia, around 1737. His diary notes: ‘After evening prayers, we joined with the Germans in one of their love–feasts. It was begun and ended with thanksgiving and prayer, and celebrated in so decent and solemn a manner as a Christian of the apostolic age would have allowed to be worthy of Christ.’

In Yorkshire, Methodism became firmly established in the mid 18th century. Wesley was a regular visitor to the region and Methodist preachers soon gained a strong following. Meeting houses and chapels were established across the region, providing education and entertainment to worshipers, as well as moral and religious instruction.

The Lovefeast became a regular part of the Methodist scene and among offshoot groups, including Wesleyans, Independents, Primitives, New Connexion, and Bible Christians.   It was an opportunity for the worshipers to enjoy each other’s company, as well as give testimony to God’s grace, hear exhortations, and to learn about the spiritual lives of others.  Hymns, songs, and other forms of praise would be given – and food would be eaten. A large communal cup of water was also often passed around.  From 1830 onward the more affluent chapels often acquired their own two-handed tankards, made of white earthenware with hand-painted inscriptions recording the name of the chapel and the word ‘Love-Feast’ (see example above).  Food would be especially prepared, including a Lovefeast loaf.  Here are some regional Lovefeast loaf recipes recorded in the early 20th century, but originating well before then.

Dawson, J.M. (1978) Methodism at the Grass-Roots in the Great Haworth Round. Wesley Historical Society, Yorkshire Branch, Occasional Paper no.3.

See also The First Lovefeast in the West Riding

One Response to Lovefeast Loaf