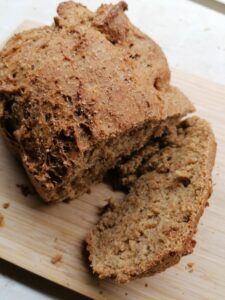 Do you need more vitality, vim and vigour in your life?  Of course, you do!

Around 1900, Spillers launched an off-shoot: the Turog Brown Flour Co, and immediately began to sell the virtues of their wheatgerm flour in terms of its power to invigorate you with ‘vim’ and ‘vitality’.  If you ate Tuborg brown bread every day you would, they boasted, ‘…lay the foundations for a healthy future’.  You wouldn’t exactly light up like a pinball machine, but your ‘vigour’ would definitely take off.   Spillers launched a big and successful advertising campaign and many grocery shop windows across Britain displayed the Turog window logos.

The Turog loaf became a serious contender with Hovis, but, alas, its vim ran out in the 1970s.  However, before its demise it didn’t take long for home bakers in the region to come up with their own version of Turog bread, and here’s a recipe from ‘Baker Mike’, who writes a regular baking column for the Keighley News.

The black treacle gives it a distinctive nutty flavour.  I like a big slice of this, thickly buttered, and accompanied with a Yorkshire sized wedge of Wensleydale and a generous bowl of vegetable soup.

Ingredients
Method
1. In a large mixing bowl, add the flour, salt and black treacle.
2. Mix together the yeast and warm water and add to the mixing bowl to from a rough dough.
3. Empty the contents of the bowl onto a floured work surface and knead well for 10 minutes until springy, cohesive and tacky dough.
4. Return the dough back to the mixing bowl, cover with a tea towel and allow to prove somewhere warm till double in size.
5. On risen well, divide the dough in two, shape and place into greased 1lb bread tins.
6. Leave to prove again till double in size before baking in a hot preheated oven 220c / 200c fan / Gas 7 dusting over the tops with a little flour.
7. Bake the loafs for 35 minutes until a good crust has formed and the loafs sound hollow when tapped on the base.